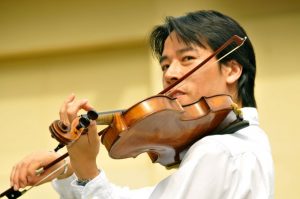 Born in Sydney, Australia, Michael PON began her musical studies at the age of 5 years with the Piano. A 8 years, He began to learn the violin with the Suzuki method (https://imsp.fr/la-methode-suzuki/), Thanks to the teaching of Miss Yvonne GANNONI. It will guide him to various degrees necessary for the accomplishment of his career professional violinist and teacher in Australia, Europe and the United States.

After completing his secondary studies, Michael PON perfected the practice of the violin, and at the same time devoted himself to the study of Music Education. He obtained the title of Professor Suzuki for teaching in all schools in the world. Among his teachers, Examples include : M. Harold BRISSENDEN (Honorary President of the Suzuki Association of the Education of the Talent in Australia), Professor John KENDALL (Founder & Honorary Life Member of the Suzuki Association in America), M. Tsuneo KOBAYASHI (Professor / instructor looking for Talent Education and the teaching of the violin, Japan), M. Yasuki NAKAMURA (President of the Suzuki Association “Pan Pacific”), Professor William STARR (Director of the Suzuki program at the University of Tennessee, U.S.A.), and Miss Hiroko SUZUKI (Instructor at the International Academy of the Suzuki method, Violin teacher, and Niece of Dr. Shinichi SUZUKI). Include also other teachers such as Miss Miwako ABE (Former Assistant to Sandor VEGH), M. László KISS (Conservatory of music in Sydney) and M. Goetz RICHTER (Concertmaster of the Sydney Symphony Orchestra).

Michael PON taught the Suzuki Method (https://imsp.fr/la-methode-suzuki/) for the Violin and the Alto #8217, also in Classes for beginners, as well as the traditional method for violin and viola in Australia, Europe and the United States. He was lecturer at the Waverley high school (Australia) and at the Lycée Scots in Sydney (Australia), and he is the founding member of The International Music School of Provence, France (http://imsp.fr/).

Michael PON is the holder of a Licence of music, option violin, of a Licence of the Music Education, a violin Concert Licence, Diploma of Professor of violin for the Suzuki method teaching, as well as a diploma in Direction d'Orchestre (http://m.PON.free.fr/)

He is currently Professor Coordinator of stringed Instruments, and teaches violin and viola at The International Music School of Provence, France (https://imsp.fr/).

Born in Paris, Irène Ranson began playing the piano at 14 years and enters the conservatory of Aix-en-Provence in 15 years in the class of Clara Woringer where she obtains the Diploma of End of Studies (FDEA). She continued her studies at the Kiev Conservatory (Ukraine), in the specialized piano cycle with Alla Kachenka's teacher. En 2008 passionate about pedagogy, she began teaching piano and musical training in Paris and at the same time obtained the Bachelor of Musicology at the University of Paris VIII.

For several years, Irène Ranson also devotes herself to theatre and plays classical and contemporary authors on stage..

En 2021, parallel to her job as an actress, Irène Ranson joins The International Music School of Provence.

It is at the age of 7 years since Joyce began her musical journey with the piano. Very quickly, she also took up the violin and flute, and finally on alto saxophone a few years later. During all his school studies in Sydney (Australia), from primary school to high school, she continued the practice of flute and saxophone by being part of many orchestras of all musical genres (Classic, jazz...). She took exams with the AMEB (Australian Music Examinations Board) and Trinity College London, including one time she won an award for best result from the state of New South Wales. For the exercise of these 2 instruments at the baccalaureate, she was nominated for the ENCORE program, an annual event that allows the best students in the state to show off their talents.

During his graduate studies, she was asked to give music lessons, in private homes but also in a music school. Arrival in France, she was part of the Boulogne-Billancourt orchestra as a saxophonist and today, she enjoys playing other instruments such as the guitar, the battery and the cajón.

Thanks to its rich and international experience, Joyce is a versatile musician with a passion for sharing the joy of music, not only with his own children but also those of The International Music School of Provence. 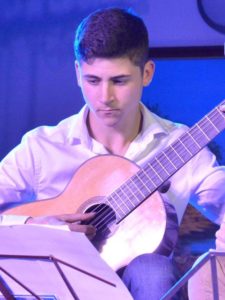 The following year #8217, he started playing guitar at the #8217 Carry-le-Rouet School of Music. At the #8217 age of 15 years he returned to the Marseille Conservatory in graduate school in guitar and 2019 gets its mention award “very well at #8217 unanimity”. That same year he participated in the awards ceremony of the Marseille Conservatory and won the Scotto Prize. #8217 It was then that #8217 he wanted to start sharing his guitar know-how with the Suzuki method at The International Music School of Provence (http://imsp.fr/).

JOB VACANCIES, Are looking for teachers in Marseille & Aix-en-Provence