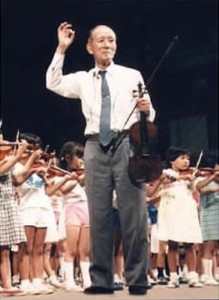 Shinichi SUZUKI was born in 1898 to Nagoya (Japan).
His parents were luthiers, But despite this family environment, He received no musical training. However he had the opportunity to hear a recording of the violinist Mischa ELMAN, what determined his vocation.

Suzuki began the study of violin by listening and imitating what he heard in the recordings of the great concert. He made a trip to Germany where he studied with Karl KLINGER. The Japan returns, He met many difficulties because of the second world war.
This motivated to provide children with a development of their lives, and thus positively influence through music, and especially from listening, as he had done for himself.

What he wanted above all, It was to develop the sensitivity and responsiveness of children to beautiful music. His goal was not to make virtuoso, but to educate their taste for work, effort, concentration, the sense of responsibility and respect for the discipline.

He understood that teach the children to hear, enjoy and create beautiful music, developing of great souls, and brought to the world, peace and serenity. To this end, He used the concept: "Personality of first, «virtuosity after "Recognizing that the development of musical talent was secondary compared to the moral nature.

Suzuki had noticed, During his stay in Germany, and while he same adult, had difficulty learning the language, that German children spoke fluently and with ease , their mother tongue. Observing that it was same for children in all countries, who learned to speak naturally hearing and repeating sounds, and receiving an enthusiastic encouragement, it applied the principle of the “Tongue” the teaching of music.

Dr. Suzuki has created the school of music of Matsumoto and the Talent Education Research Institute in the Japan. In the years 1960 Suzuki students on a trip to the U.S.A. greatly impressed a group of music teachers. This method being spread , There are currently in the United States, thousands of students studying the violin, Viola, the cello, the double bass, Guitar, the harp, the piano, the flute, the recorder, and also the voice. The Suzuki method is currently taught in 38 countries with most of 400,000 students in the world.

The 8 basic principles of the method